Incredible boxing training near me, such as Legendary Boxing Training, continues to proliferate as the boxing passion spreads. And there is a good reason for this: boxing is an excellent total-body workout. You will sweat, punch out any negative emotions with multiple Boxing: Types Of Punches, and feel completely badass while doing so.

Boxing may appear daunting, but it does not have to feel frightening. Before your first class or training session, arming yourself with a few fundamental movements will set you up for success in the ring. But before you begin, you’ll need to brush up on your posture and breathing technique, and then you’ll need to learn the fundamental motions mentioned below.

As soon as you assume a boxing stance, minor adjustments make it simpler to acquire a steady fighting position, therefore enhancing your boxing technique. You will notice that your punches are more effective without requiring you to overextend your lead foot and put yourself in a vulnerable position. 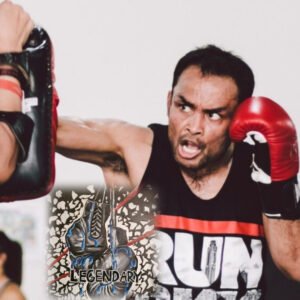 You will also be less likely to lose your balance when you must react fast, rotate away from an opponent’s blow, or stretch onto your toes during a one-two combination. A decent posture enables you to deliver a greater range of punches without leaving you overly vulnerable.

The instant you establish your stance, you’ll have more power, mobility, and balance. While everyone’s stance is different based on their physique, obtaining a decent boxing stance—one that is ideal for you—requires following certain fundamental rules.

Here are the criteria for mastering the correct boxing stance technique:

Breathing is surprisingly one of the most frequently neglected parts of the technique.

In boxing, proper breathing is crucial and may guarantee that every technique is utilized to its fullest capacity. It has a greater impact on a boxer’s performance than you may believe and is a major influence on how a boxer performs.

To breathe properly in preparation for a punch, inhale. As you toss, exhale quickly through your mouth (as opposed to your nose) with your jaw closed. This should sound comparable to a hiss.

In a genuine bout, if your mouth is open and you take a direct blow to the chin, you risk fracturing your jaw. This quick exhale is intended to activate the core and link the punch to the body. This breathing method improves timing and strength.

It’s time to learn how to throw a punch, now that you’ve mastered the boxing stance and breathing method.

In boxing, there are four primary punches:

In nearly every boxing lesson, the jab is the first punch you will likely learn. It is also referred to as “one” when combinations are called out.

A cross, often known as a number “two” punch, is a forceful straight blow delivered across the body by the dominant hand. The cross is a versatile knockout punch that is useful in a variety of scenarios.

Three and four Hook Punches are normally your right hook and left hook. The hook is perhaps one of the most effective blows in boxing. Here is how to properly throw a left hook:

Five and six are sometimes referred to as your left and right uppercuts. Imagine landing a hard blow below your opponent’s chin with this technique.

In addition to mastering the aforementioned fundamental punches, it is also vital to learn basic boxing maneuvers such as the slip and roll.

The slip is an effective defensive head movement designed to remove you from the line of an opponent’s straight blow. Slipping can allow your opponent’s blow to miss while simultaneously preparing your body for a counterpunch. 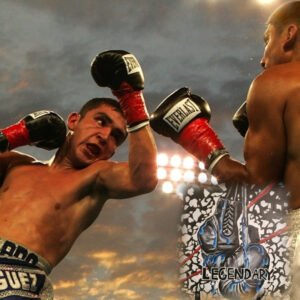 To Slip, assume a boxing stance with your fists up in guard. If your opponent throws at your right side, swivel your torso to the left, lower your left shoulder, bend your knees, and crunch to the left to avoid the shot.

Repeat on the right side of your opponent’s left-handed throws.

The roll is another useful defensive maneuver used to avoid your opponent’s hooks by bending your knees and transferring your weight to the opposite side, and vice versa (rolling in vs. rolling out).

To roll, assume a boxing posture. As your opponent delivers a blow, like a hook, send your hips back and bend your knees, then transfer your body weight from one leg to the other as you rise.

Boxing is not only an excellent sport but also a fantastic method to get in shape. Learn the fundamentals of boxing and choose a gym like Legendary Boxing to lead your fitness journey. Trust us – you’ll be pleased you did!

If you’re interested in boxing and don’t know where to start, join youth boxing classes near me! Contact coach Carlos Jones at (708)665-2623 for more assistance on this and Boxing: How To Wrap Your Hands.